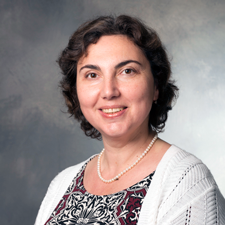 Anna Shostya received her PhD in Economics from New School University and her MA in Economics from the City University of New York. She has developed several innovative courses, including the Economics of Immigration and Discrimination and Economic Issues through a Photographer's Lens. Since 2006, she has also been a Visiting Lecturer at the University of Shanghai for Science and Technology. She co-teaches a study abroad course to China, entitled “From Wall Street to the Great Wall.”She is a recipient of an Excellence in Teaching Award, as well as the Mentoring Award. She is a member of the Oxford Round Table for her research contributions to the area of higher education in the US. Dr. Shostya is also an avid photographer and has participated in several photo exhibitions.

Her major fields of study are transition economies, higher education, and China economic studies. She has published a variety of papers in her fields and has presented her work at national and international research conferences.

Shostya, A. & Colburn, P. (2015, September). Economic Growth with a Russian Flavor: A Comparative Study of Poland and Ukraine..
Provost-sponsored grant , Pace University . Funded,In the early 1990s, after the fall of the Berlin Wall and the collapse of the Soviet Union, two countries stood out for their size and potential. One was Poland, a country of 38m people and with a centuries-long list of battles and invasions that constantly altered the maps of the Eastern Europe. The other was Ukraine, a country of 52m people who were desperate to start a sovereign existence, independent of any rule, in particular that of Russia. At the moment, it was not clear which one would succeed in improving the standard of living of its citizens. Both seemed to have the same potential. Both seemed to have the same starting point in terms of the GDP per capita. And both were suffering from what was termed “a transformational recession.” Today, such a comparison would be considered absurd. Ukrainian economy is heavily indebted and is shrinking at an annual rate of 18% (the Economist, May 23rd, 2015), mainly due to the war with Russia. Poland was a huge success in transforming its economy during the 1990s. It was also the only European country that retained positive economic growth during the recent Global Financial crisis. Today, Poles are three times richer than Ukrainians (the Economist, May 23rd, 2015). They also enjoy the benefits of being members of the European Union, something that many Ukrainians can only dream of. This research attempts to explain this remarkable divergence. Clearly, some of the factors that lead to the divergence have been purely economic. While the West financed Poles' transition from socialism to capitalism rather handsomely, the sums that have been offered to Ukraine are surprisingly small. Poland also was willing to embrace the structural reforms sooner and remained loyal to the Washington Consensus that praised free market for creating the environment favorable for economic growth and development. Ukraine's shadowy legal system and corrupt governmental apparatus slowed down market reforms and hindered the transition. But there is one more factor that should be considered -- geopolitics. Russia reconciled itself to Poland entering the European Union and becoming part of the west. Yet, Russia has been trying to maintain its grip over Ukraine ever since the USSR had split into 15 sovereign countries. Every time Ukraine makes a step closer to the European Union, Russia retaliates. In the process, Ukraine has lost Crimea. It is losing its coal mines in Donetsk as we are typing this proposal. The purpose of this research is to identify the effect of Russia's wrecking tactics on Ukraine's economy and compare them with economic and internal political factors that determined the growth in Ukraine after the 1991. The goal is to draw parallels between the two countries and using the model of economic growth for Poland, to see what would the GDP per capita and GDP rate of growth be if Ukraine was not vulnerable to Russia's economic, political, and military blackmail.