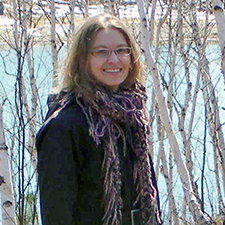 I came to Pace University from Canada in the Fall of 2012. I have always been interested in animals and nature, which led me to pursue graduate studies in 2002. I completed graduate work on guppies in Trinidad and cichlids in Uganda. I then went on to study minnows in Alberta for postdoctoral work. I continue to work on these systems while also delving into the study of organisms and environments in the New York area.

Crispo, E. (2015, November). A new index to use in conjunction with the h-index, to account for an author's relative contribution to publications with high impact. Journal of the Association for Information Science and Technology. Vol 66 (Issue 11) , pages 2381–2383 .

My research is at the interface of molecular ecology and ecological genetics. That is, I use molecular tools to understand ecology, and I study how genomes evolve in response to the environment. More specifically, I am interested in how freshwater fish populations adapt to environmental stressors, including hypoxia and pollution. I am most interested in questions revolving around the role of phenotypic plasticity in adaptation, and how phenotypic plasticity evolves, through examination at both the molecular and phenotypic levels.