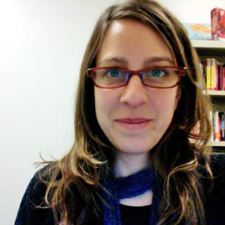 My research focuses on the connection between identity and mediated communication. I am interested in the ways in which we come to understand ourselves, and our worlds, through our relationships with media texts and technologies. Specifically, my research has explored how media impacts gendered identities and our perceptions of the feminine. I graduated from Oberlin College with a B.A. in Women's Studies. I received my M.A. in American Studies (concentration in Women's Studies) from SUNY at Buffalo and my Ph.D. in Media, Culture and Communication from New York University.

International Business Times [Internet], November 6 2014
Quoted in a story: "Lena Dunham Controversy: Is 'Hipster Sexism' What Has Everyone Up In Arms?"

Central Time, Wisconsin Public Radio [Radio], October 3 2014
Interviewed for story, "UN Women Launches He For She Campaign To Get Men Involved In Feminism"

The Kathleen Dunn Show, Wisconsin Public Radio [Radio], April 22 2013
Contributor to conversation about the meaning of feminism in the 21st century.

Current Health Teens [Magazine], February 2011
Interview/Quotations, “Gazing at the Stars: Celebrity Worship is a Big Part of Our Culture, But Is it a Good Thing?”

Drake Magazine [Magazine], 2010
Interview/Quotations, “F-Word, Feminism is in Style and More Needed Than Ever” by Eric Strecker