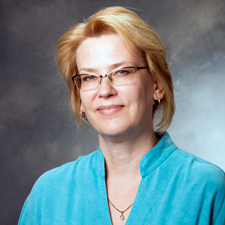 Dr. Upmacis obtained both her BSc and PhD degrees in Chemistry from the University of Nottingham, UK. She was a postdoctoral fellow in Bio-inorganic Chemistry at the California Institute of Technology, and performed research at Rohm and Haas Company (Philadelphia) and Weill Cornell Medical College (New York) before coming to Pace University in 2010.

Dr. Upmacis' research focuses on investigating factors that lead to oxidative and nitrative stress under conditions of inflammation during disease states and also infections. Oxidative and nitrative stress occurs when there is an overproduction of reactive oxygen and nitrogen species that can act together to cause toxic effects in cells and contribute to inflammation. Recent research has examined the products formed when certain omega-3 polyunsaturated fatty acids, found in fish oils, scavenge oxygen. In addition, the effects of omega-3 polyunsaturated fatty acids and their oxidized products on parasite survival are under investigation.