"The Entrepreneur's Cookbook: Strategy and
Resilience in the Restaurant World"

Andy Pforzheimer is the co-founder and former CEO of Barteca Restaurant Group, and its two concepts, Barcelona Wine Bar and Restaurant and bartaco.

A restaurant professional for 38 years, Pforzheimer became interested in the industry as a teenager, and began his career washing dishes and microwaving fast-food Mexican. He took it up a notch while attending college at Harvard, taking time off to serve a classic two-year apprenticeship in Burgundy. Upon returning to the U.S., he worked in kitchens across America under numerous notable chefs throughout the late 1980s and early 1990s, including Jeremiah Tower at Stars (San Francisco, CA); Anne Rosenzweig at both Arcadia and the "21" Club (New York, NY); and Patrick Healy at Colette (Los Angeles, CA). He eventually moved to Connecticut where he was the original Food Editor for Martha Stewart Living magazine. During this break from restaurant life he wrote features for the New York Times and Elle magazine, and ghostwrote cookbooks.

Pforzheimer eventually started his own catering and consulting business, which is how he met his Barteca partner, Sasa Mahr-Batuz, who presented him with the idea of opening a tapas restaurant. The two opened the first Barcelona Wine Bar location in 1996, featuring the most authentically Mediterranean dishes they could create with what was available in the suburbs in 1996. One Barcelona became six, as they grew throughout the state one small restaurant at a time. In 2010, Pforzheimer and Mahr-Batuz started a new taqueria concept, Bartaco, serving upscale street food with a coastal beach vibe. In 2012 they took on a partner in Hal Rosser and Rosser Capital, and began opening restaurants further from home. In June 2018, with 32 restaurants in 14 states, they sold Barteca to Del Frisco's Restaurant Group for $325 million.

After stepping down as full-time CEO in 2016, he has devoted his time to continuing to serving on the Boards of US Foods, Hickory Tavern, Postino Restaurants, and the Education Policy committee of the CIA; by teaching restaurant entrepreneurship and management at the Institute for Culinary Education in NY; by helping to create the CIA's Food Business School as founding faculty; and by traveling with his wife, Zelie, and getting in as much fishing as he can. He is the proud father of three boys, two of whom are partners in a start-up farming business in Martha's Vineyard.

Click through photos and highlights of Executive in Residence: Andy Pforzheimer, or view the entire album. 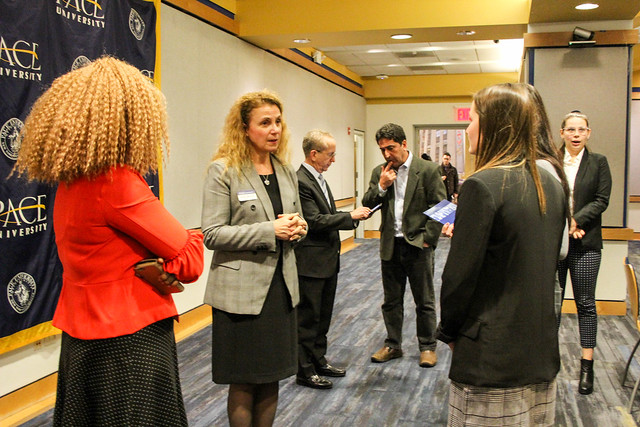 For more information about the Executive in Residence program, please contact Lubin's Office of Communications and External Relations, lubin@pace.edu, (212) 618-6500.