Alan Zweibel
An original Saturday Night Live writer who The New York Times says has "earned a place in the pantheon of American pop culture," Alan has won multiple Emmy, Writers Guild of America, and TV Critics awards for his work in television, which also includes It's Garry Shandling's Show (which he co-created and produced), Monk, PBS's Great Performances, The Late Show With David Letterman, and Curb Your Enthusiasm.

A frequent guest on all of the late night talk shows, Alan's theatrical contributions include his collaboration with Billy Crystal on the Tony Award-winning play 700 Sundays, Martin Short's Broadway hit Fame Becomes Me, and the off-Broadway play Bunny Bunny � Gilda Radner: A Sort of Romantic Comedy, which he adapted from his best-selling book.

Other books by Alan are the 2006 Thurber Prize-winning novel The Other Shulman, the popular children's book Our Tree Named Steve, North, a collection of short stories and essays titled Clothing Optional, the novel Lunatics that he co-wrote with Dave Barry, and the recently released middle grades novel Benjamin Franklin: Huge Pain In My ___, that he co-wrote with Adam Mansbach.

Alan's humor has also appeared in such diverse publications as The New Yorker, Esquire, The Atlantic Monthly, The New York Times Op-Ed page, The Huffington Post, Modern Bride, and MAD magazine. He has also penned a best-selling e-book titled From My Bottom Drawer.

The co-writer of the screenplays for the films Dragnet, North, and The Story of Us, Alan has received an honorary PhD from the State University of New York and because of the diversity of his body or work, in 2010 the Writers Guild of America, East, gave him a Lifetime Achievement Award.

Alan is currently adapting his novel The Other Shulman as a feature film, writing and producing a television pilot for IFC, and writing the book for a Broadway musical version of Field of Dreams.

And in addition to the late night talk shows, on the TV screen he's also appeared in episodes of Curb Your Enthusiasm and Law & Order.

But the production that Alan is most proud of is the family he's co-produced with his wife Robin: their children Adam, Lindsay, and Sari; and their grandchildren Zachary, Alexis, Jordan, and Kylie.

Photos and Highlights from Executive in Residence Alan Zweibel

Author, playwright, and television writer Alan Zweibel has won multiple Emmy, Writers Guild of America, and TV Critics awards for his work on television including Saturday Night Live, PBS' Great Performances, It's Garry Shandling's Show, Monk, Curb Your Enthusiasm, and The Late Show with David Letterman. He also received a Tony Award for his collaboration with Billy Crystal on the play 700 Sundays; a Thurber Prize for his book The Other Shulman; and his humor has appeared in many magazines and publications.

Zweibel was interviewed by Dean Braun at the Schimmel Theatre to a packed audience of faculty, staff and Pace University students. Zweibel spoke about the storied beginnings of his education and career, and how persistence was the key to his many successes. Zweibel also shared humorous anecdotes about his life, famous friends, and his career. Students took away the sense that hard work, determination, networking and teamwork were keys to a successful career, in any industry. 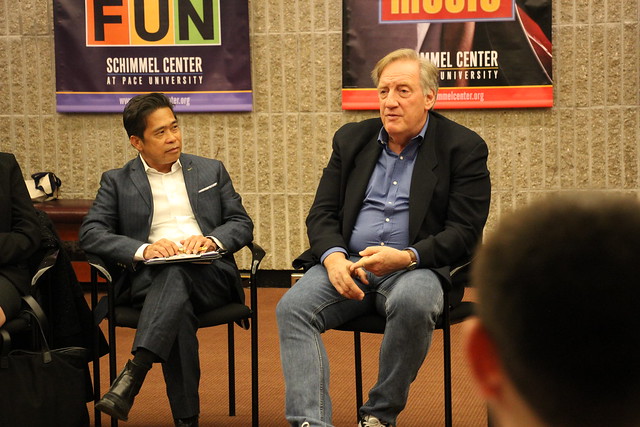