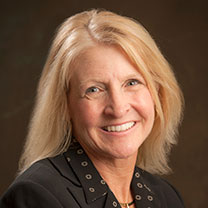 Dr. Maneval the Senior Associate Dean and Professor for the College of Health Professions and the Leinhard School of Nursing at Pace University. She obtained her BSN from the Pennsylvania State University, MSN from Villanova University, and her Doctorate in Education from the Pennsylvania State University. Dr. Maneval is a Fellow in the New York Academy of Medicine and is an AACN Leadership for Academic Nursing (LANP) Fellow. She has received a number of awards for both her leadership and teaching. Dr. Maneval has administered nursing education programs for over 20 years. She is currently the PI of two studies focusing on nursing education practices. She has most recently been a member of a study team who received an IPE HRSA grant.to develop a program to increase interprofessional communication and collaboration between medical residents, nurse practitioners, and pharmacy students. She is an experienced researcher who has recently served as a nursing research and EBP consultant to a Magnet Hospital System. Her scholarship and expertise is in curriculum development and evaluation, evidence-based practice, interprofessional communication, and infusion nursing. Dr. Maneval has had numerous presentations on curriculum development issues and is currently the lead investigator for a longitudinal study exploring the use of the TeamSTEPPS® method for teaching professional communication and teamwork skills as a strategy to enhance undergraduate student competency in interprofessional communication and another study exploring writing genres in nursing education.

The influence of gender on stroke survivors and family caregivers Writing genres and grading practices in undergraduate nursing The effect of TeamSTEPPS training on UG nursing students interprofessional attitudes, values and behaviors .